The Basilica of Santa Maria degli Angeli e dei Martiri is dedicated to the Virgin, the Seven Chief Angels and the Seven Martyrs. The church is located in the Piazza della Repubblica (Piazza della Repubblica) in Rome, in the very place where the luxurious ancient baths of Diocletian once operated. The baths themselves were built in the period from 298 to 305. The thermal complex had an area of ​​more than 13 hectares, and at the same time it could accommodate more than 3 thousand people. Here gardens were laid out, fountains, pavilions for guests, a library and halls for sports competitions were arranged.

Michelangelo himself worked on the project of the temple and monastery near the church.

The plan of the church is based on an equilateral (Greek) cross.

The main premises of the thermal baths were preserved during the construction of the church. The main hall of the temple is located where the tepidarium (a warm and dry room of Roman baths for warming up the body) was once located. The eight columns that support the building are from that ancient time. Eight more were added later. 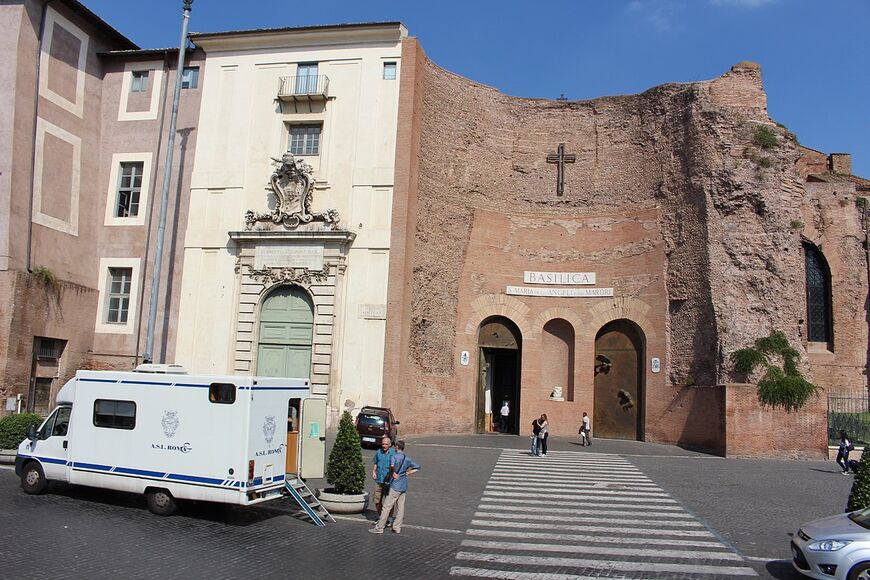 The basilica was rebuilt several times. In 1702, a large sundial appeared - a black marble strip with a metal beam was laid on the floor. It was the most accurate clock in Rome, all residents of the city came here to check the time. Until, in 1846, the tradition of a cannon shot at noon from the tower of the Castel Sant'Angelo appeared.

From the facade of the church by Luigi Vanvitelli got rid of at the very beginning of the 20th century. Today, part of the exedra caldaria (rooms where baths were once installed) plays the role of a facade.

Another reconstruction touched the floor of the church, which was raised 2 meters to protect the church from being flooded by groundwater.

Inside the basilica you can see ancient columns, incredible sculptures, ornaments, famous paintings (most of them belong not to Italian, but to French artists of the 17-18 centuries). The basilica also houses ancient Byzantine icons.

On the sides of the central aisle of the church are statues of angels created by the sculptor Giovanni Batista Rossi (a disciple of the great Bernini). Above the angel on the right is an incredibly believable statue of St. Bruno, created by the French sculptor Jean-Antoine Houdon.

It is interesting to read:  Tokyo Palace in Paris

Inside the basilica is the grave of the Italian artist and poet Salvator Rosa, as well as the grave of the architect Carlo Maratta, who worked on the reconstruction of the building. In addition, General Armando Diaz (who fought during the First World War), the great admiral Taona di Revel and Vittorio Emmanuel Orlando, the former prime minister of the country, are buried here.

Santa Maria degli Angeli e dei Martiri is a titular church, the cardinal priest with the title of the church is currently the Swedish cardinal Lars Arborelius.

History of the Basilica of Santa Maria degli Angeli in Rome

This basilica is unique, as it was built on the site of a giant thermal bath, which, in turn, was erected by the forces of numerous slaves and Christian martyrs - hundreds, if not thousands, died during the construction. The name of the church reflects the grief of those people. In fact, it is built on their bones.

The church itself appeared thanks to the efforts and willpower (and the power of faith as well) of the Sicilian monk Antonio del Duca, who for decades sought to start building a temple on the site of the ancient Roman baths.

One day a monk saw an icon depicting the Seven Angels and was amazed at the power emanating from it. Duca immediately went to Rome, where he created the Mass of the Seven Angels liturgy. He sent it to the influential Cardinal del Monte for consideration. Together they managed to achieve the recognition of the cult of the "Seven Angels" from the Vatican. However, in 1533 del Monte died, and Duca, having lost his patron in the Eternal City, went back to his native Sicily.

But after 8 years he returned and became chaplain of the Church of Santa Maria di Loreto (located at the Forum of Trajan, built in 1507) in Rome. In 1541, Duca saw an extremely bright light that came from the baths of Diocletian. In the center of the light, he made out the silhouettes of the Seven Saints. The monk interpreted the vision as a blessing for the creation of a temple on the site of the ancient Roman baths. On the seven columns of the tepidarium, Duca wrote the names of the most important Angels. And then he began to try to get permission to build a church. However, Pope Paul III was against it. 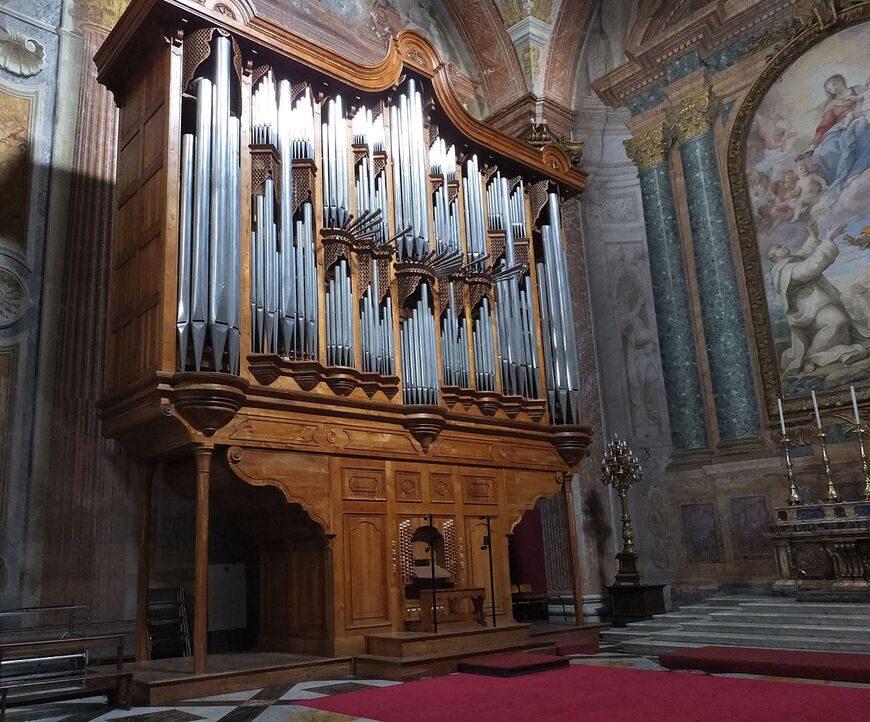 Only 7 years later, after the death of Paul III, under Pope Julius III, the Vatican gave the go-ahead for the construction of the temple. In 1550, the Pope ordered the vicar of Rome to sign a decree on the illumination of the church in honor of the Mother of God, the Seven Angels and the Seven Martyrs. However, the signing of the decree did not mean that the church would begin to be built right there. The fact is that the powerful relatives of the previous pope, Paul III, chose the places of the baths of Diocletian. Here they hunted, arranged horseback riding. And they did not want to leave these places at all. They in every possible way obstructed the start of construction.

Pope Julius III was never able to get the church to start building. But Duka was not going to retreat. The construction of the temple began only in 1561 thanks to Pope Pius IV, who took advantage of the papal bull.

It is interesting to read:  St. Peter's Cathedral in Rome

The development of the project was led by Michelangelo, who at that time was already 86 years old. The idea to build the church into the existing façade of the thermae also seems to belong to a genius. Unfortunately, Michelangelo died in 1564. By the way, Antonio del Duca, who fought so fiercely for the church, and thanks to whom it nevertheless appeared, also died in 1564.

Already in the 18th century, Luigi Vanvitelli, an architect from Naples, took up the church. He then created a magnificent facade, which in the 20th century they decided to dismantle, restoring the original idea of ​​Michelangelo.

There is also an element of modernity in the temple. So, the author of the bronze doors leading to the temple is the famous Polish sculptor Igor Mitoray (he died in 2014 at the age of 70). On one door you can see the scene of the Annunciation, and on the second - the Resurrection. The doors were installed in 2006, replacing the old wooden doors, which were in a deplorable state.

The Basilica is located in the heart of Rome, close to Termini Central Station. Those who arrive in Rome by train see this square first. You can take the opportunity and immediately go to the church.

If you live in another area of ​​Rome, then getting to the church will not be difficult, either by public transport or by taxi or on foot (the most convenient way).

You can also take the metro lines MEA and MEB. The nearest station is Reppublica. You can find the Rome metro map on the official metro website.

It is interesting to read:  Barberini Palace in Rome

You can also take a taxi to the church. You can use Uber or Gett services by ordering a car through an app on your smartphone, or you can order a car from one of the private firms operating in Rome (for example, Radio Taxi by phone 06-3570 or Pronto Taxi by phone 06-6645). However, taxi prices in Rome are high.

Map of the walking route from the Colosseum to the Basilica of Santa Maria degli Angeli e dei Martiri:

Map of the walking route from St. Peter's Basilica to the Basilica of Santa Maria degli Angeli e dei Martiri:

Map of the walking route from the Trevi Fountain to the Basilica of Santa Maria degli Angeli e dei Martiri:

Statue of Louis XIII in Paris
Among not the most glorified, but noteworthy sights

Place de Clichy in Paris
Clichy Square (La place de Clichy) is located at the southern
We use cookies on our website to give you the most relevant experience by remembering your preferences and repeat visits. By clicking "Accept", you consent to the use of ALL the cookies.
Do not sell my personal information.
Cookie SettingsAccept
Manage consents

This website uses cookies to improve your experience while navigating through the website. Out of these, the cookies that are categorized as necessary are stored on your browser as they are essential for the working of basic functionalities of the website. We also use third-party cookies that help us analyze and understand how you use this website. These cookies will be stored in your browser only with your consent. You also have the option to opt-out of these cookies. But opting out of some of these cookies may affect your browsing experience.
Necessary Accept all
Required cookies are absolutely essential for the website to function properly. These cookies ensure basic functionalities and security features of the website, anonymously.
Functional
Functional cookies help to perform certain functionalities like sharing the content of the website on social media platforms, collect feedback, and other third-party features.
Performance
Performance cookies are used to understand and analyze the key performance indexes of the website which help in delivering a better user experience for the visitors.
Analytics
Analytical cookies are used to understand how visitors interact with the website. These cookies help provide information on metrics on the number of visitors, bounce rate, traffic source, etc.
advertisement
Advertisement cookies are used to provide visitors with relevant ads and marketing campaigns. These cookies track visitors across websites and collect information to provide customized ads.
Others
Other uncategorized cookies are those that are being analyzed and have not been classified into a category as yet.
SAVE & ACCEPT